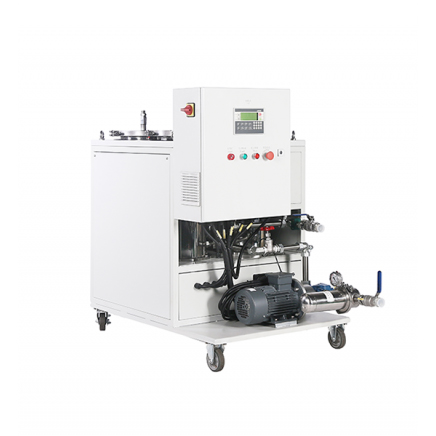 System cleaning function, through the flow of electrostatic particles in the oil, all impurities such as sludge paint film and oxide attached to the oil tank, pipe wall and components are washed and adsorbed.


Send email to us

》Except engine (engine) oil, all petroleum-based lubricants are applicable. Oil viscosity is less than 200cSt.

》Water content is less than 500ppm.High requirements for oil, and system with more fine particles and oxidized sludge.

》Through the fiow of electrostatic particles in the oil, all impurities such assludge,varnish attached to theoiltank , pipewall and components are washed and adsorbed and taken out.

The particulate pollutants in the oil are charged due to collisions, friction, and thermal molecular motion. When the charged particles move in a directional movement under the Coulomb force of the high-voltage electrostatic field, they are adsorbed on the collector. The neutral pollutant particles are polarized in the electric field, and they also make directional movement in the non-uniform electric field and are captured by the collector medium.

The fold design is adopted between the collector media to enhance the high gradient non-uniform electric field. When the oil passes through the medium, the distance between the oil and the medium of the medium collector is very small, which increases the chance of particles being adsorbed and greatly improves the purification efficiency. When the oil circulates through the collector, pollutants, sub-micron particles, and oxides are constantly adsorbed, so that the oil gradually becomes clean.

WJD doesn’t charge particles but instead using a vertical positioned electrode to generate a high potential electrostatic field inside acylinderhousing. Asnaturalg. Asnatural charged particles with oil pass upward throughelectrostatic adsorption collector, insoluble contaminants as small as submicron are forced by voltage against the pleated cellulose media and removed from oil.

Write your message here and send it to us